On this page you have the opportunity of acquainting yourself with the overall results of the EKO‑KOM System.

During the period from 1997 until the end of 2021 the EKO‑KOM System has assured recovery and recycling 13,1 million tons of packaging waste for its clients.

The EKO‑KOM System, which has fulfilled the terms of authorisation in the long-term, ensures that waste from used packaging is separated by the consumer, collected and subsequently undergoes final separation and is recovered as a reusable material. The EKO‑KOM System fulfils statutory obligations specified by EU guideline on behalf of its clients. 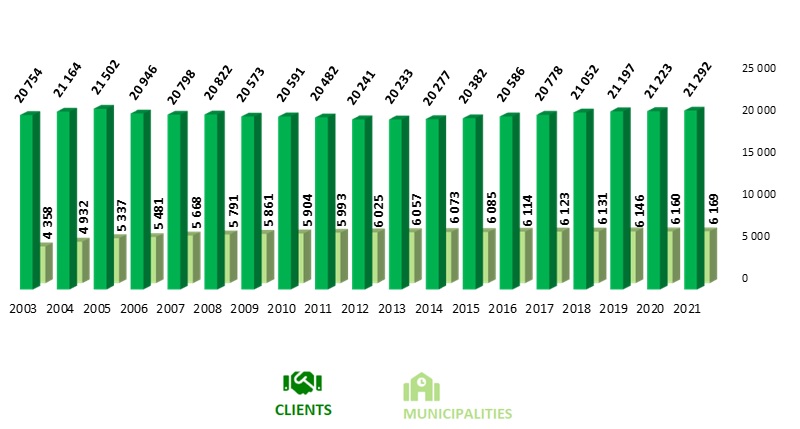 At the present time, 21,292 companies producing or importing packaged goods participate in the EKO‑KOM system operating the collection network for packaging recycling. Through the EKO‑KOM system, these companies cooperate with 6,169 municipalities in the Czech Republic, with a population of 10,515,669 people, i.e. 99% of the population. All these people are able to separate their waste and 73 % of the Czech population already does this.

By means of an authorised packaging company, companies producing packaged goods provide for collection of separated packaging waste and its treatment to yield a good-quality raw material that has rational use either in the Czech Republic or abroad.

The quantity of recovered waste increases every year. In 2021 the EKO‑KOM, a.s. Company ensured utilisation for energy and recycling of  1,022,963 tons of packaging waste on behalf of its clients. 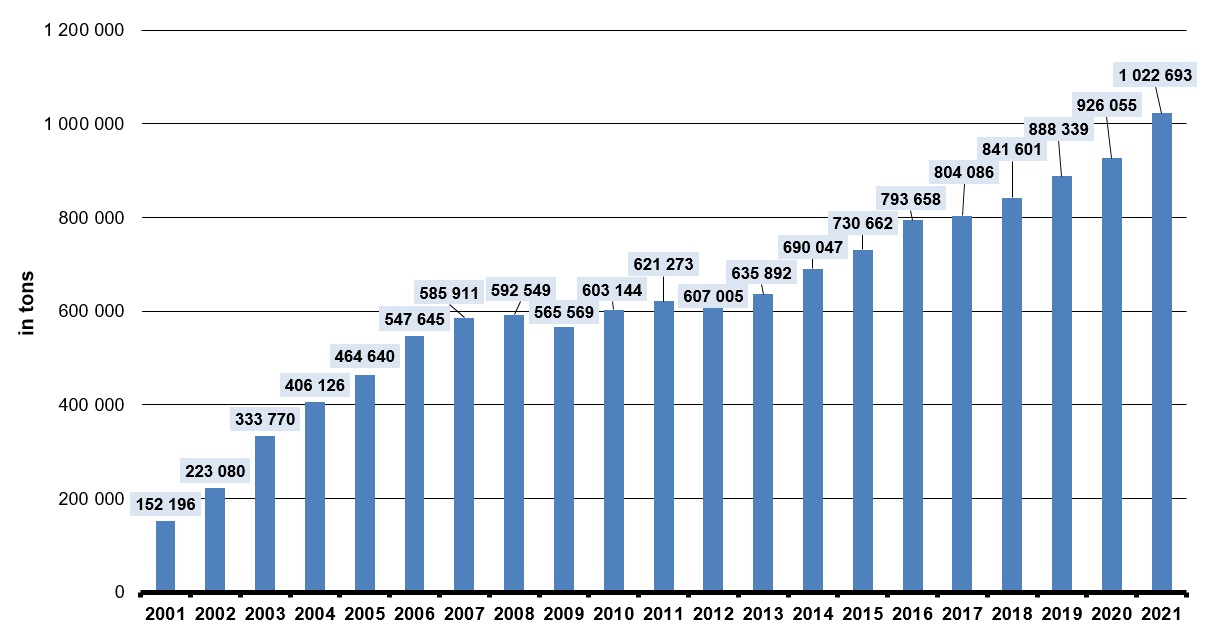 Attained level of recovery and recycling of packaging waste in 2021 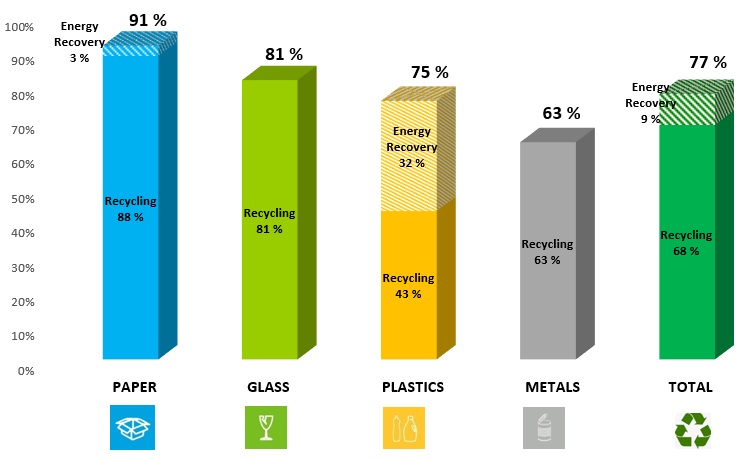 As the graph indicates, paper makes up the greatest volume of recycled packaging in the Czech Republic, followed by glass, plastic, metals (in general), wood and beverage cartons. The total recycling of packaging waste in the EKO‑KOM system has reached a level of 77 %. In addition to fulfilling legal obligations, the EKO‑KOM system demonstrably has had a favourable impact in protecting the environment in the Czech Republic.

EKO‑KOM has good results and low costs compared to the rest of Europe.

Over the past 25 years, in co-operation with Czech industry and the municipalities, the EKO‑KOM company has created a stable and effective system that is recognized and highly effective in the European context, both from the viewpoint of the attained degree of recycling packaging waste and also from the viewpoint of the costs of separation and recycling calculated per inhabitant and year.

This unambiguously confirms the BIO Intelligence Service study, which was contracted by the European Commission and which, amongst other things, compares the costs expended for separating and recycling packaging in various countries of the European Union with the achieved high level of recycling. After detailed assessment, in 2014 the authors of the study concluded that, from the viewpoint of overall costs, the Czech system of collecting and re-using packaging waste is the most effective in the compared countries.

The municipalities with their good organization of waste separation and also individuals, who separate waste voluntarily and well, unambiguously contribute to the high effectiveness of the system. Thanks to systematic awareness campaigns, over 73 % of the population consistently separates waste and this fraction is constantly increasing. The education of children and adults to sensibly and effectively separate waste constitutes one of the activities of the EKO‑KOM company.

Increasing participation in separation is accompanied by a gradual increase in the amount of separated waste per inhabitant. In 2021, every inhabitant in the Czech Republic separated 71,8 kg of plastics, glass, paper, metals and beverage cartons, placing us at the top of the ladder in Europe. Amongst other things, the constantly increasing amount of separated waste indicates that the separation system is sufficient accessible and comprehensible and easy-to-use for the population. Thus, at the present time, more than 73 % of the population of the Czech Republic actively participates in waste separation, i.e. almost three quarters of the population!

The EKO‑KOM system managed to achieve the level of recycling and recovery required by the law on packaging and the high effectiveness of the system thanks to a great many supportive activities: